Glorified by the Russian Orthodox Church Abroad on October 7/20, 1996,

Already here in the diaspora we have righteous ones in our time. Although they are not yet glorified, people receive wondrous signs from them. For example Bishop Jonah of Manchuria" (From the book "Sermons," by St. John of Shanghai and San Francisco).

For four months the boy had been suffering from an inflammation of the knee joints. Efforts to straighten his legs caused unbearable pain. It was impossible for him to stand, much less walk. Early one morning he had a dream: a hierarch vested in white appeared to him and said, "Here, take my legs. I do not need them anymore. And give me yours." The boy woke up, miraculously healed. From a photograph he identified the hierarch in his dream as Bishop Jonah who had died that very night, October 7, 1925.

The path of Bishop Jonah’s earthly life was short. Born in 1888, the boy Volodya Pokrovsky was only eight years old when he became an orphan. A kind village deacon took him in and helped him to acquire an education, first at a seminary in his native Kaluga and then at the Kazan Theological Academy. In his third year he received the monastic tonsure with the name Jonah and became a member of the Optina brotherhood. He was a brilliant student, and upon graduating he was elected to teach New Testament scriptures at the Academy, a position he reluctantly accepted in obedience to his spiritual father, the righteous Elder Gabriel.

In 1918 the Revolution forced the young hieromonk to leave Kazan. He was arrested by the communists and suffered beatings and imprisonment before escaping to Omsk where he joined a remnant of Dutev’s army in its treacherous retreat across the mountains of Turkestan and the Gobi Desert. Reaching Peking, he was received into the Ecclesiastical Mission there and soon consecrated bishop for Manchuria.

At the time of his arrival in the fall of 1922, the border town of Manjuria (present day Manchuli) was bursting with Russian refugees who had barely any more than the clothes on their backs. The native populace helped as much as it could, but its resources were inadequate to meet the needs at hand; there was not even enough bread for the children. Existing charities were poorly organized, and the spiritual structure of the community was too weak to offer much support. Suddenly, the town was electrified. The transformation — both spiritual and physical — which Bishop Jonah effected in three short years with his flock, revealed his tremendous stature as a man of action, a man of prayer and an apostle of love. He was a true archpastor. 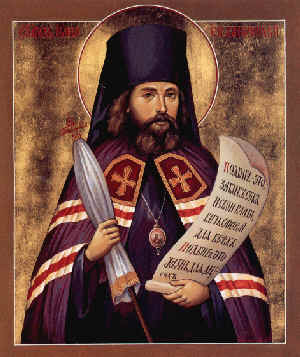 The extraordinary dimensions of his field of activity and spiritual personality are described in memoirs written by his spiritual children and persons close to him. A. Budeyev writes:

"What impressed me most were his broad horizon of interests, his tremendous intelligence, and his boundless love for people in general, with no distinction between classes or nationality. His special love was the children. In all my life I never met a man like him. He was indulgent toward all, even his enemies.

‘When starting a new project he sometimes became involved with people of uncertain allegiance, who did not inspire much confidence. I tried to warn him, as the town of Manchuria was only four miles from the Soviet border, and in my job I met people with different viewpoints and leanings. Bishop Jonah would look at me: for a moment a shadow would cross his face, but then his smile would take over again and he would say, ‘That is all right, Alexey Ivanovitch; we will accept him with kindness, for if we reject him he will go to the Soviet Consul and surely become our enemy.

"The Bishop served magnificently; each word penetrated the heart of his listener. The Liturgy would end at noon or one o’clock, but no one would want to leave the church earlier. His sermons were delivered with great pathos; one could feel the great power of his words. Each sermon was different, and no one wanted to miss a single word.

"In his short time in Manchuria, the church building was put into proper condition, an addition was built, everything was repaired or renovated. A high stone wall was erected around the church. An orphanage was founded, and a classical high school of seven grades and vocational classes was established; the best teachers to be found among the refugees were invited to teach. A large library was opened and books were gathered from all along the railway line. A soup kitchen was opened, as was a free health clinic staffed by good doctors.

"How did Bishop Jonah gather the necessary funds? When I introduced him to the district manager and the head of the administration, he made a very good impression and they donated money, flour and coal. In Harbin he paid a visit to the railroad administration, and the director of the Chinese Eastern Railroad Lines designated a monthly stipend of six hundred dollars. Often the Bishop held lectures at Harbin’s Polytechnical Institute and in return he received railroad car loads of coal.

"When the Bishop attended the religion class and spoke to the students, the entire class was captivated. Asked afterwards what the Bishop had spoken about, any one of the students could accurately repeat the whole lesson. The students loved him more than their own parents. When he walked through the hallways of the school, the young ones would run to him. He would bless all from afar with a huge sign of the cross. The older students met him with respect and a smile, and always received a wise answer to their questions."

In collecting funds for his many projects, Bishop Jonah often traveled to Harbin where there was a sizeable Russian colony. He would stay with Archbishop Meletius at the Ecclesiastical Mission. It was there that Archimandrite Polycarp came to know him: "When Bishop Jonah was appointed to Manchuria, the people there were not pious; they did not love the Church or support it or the clergy. Bells rang to announce the beginning of the service, but the church remained empty until the Cherubic Hymn. It did not take long, however, for things to change. Bishop Jonah possessed a remarkable gift of speech. When he was speaking, he could be quite formidable, but he inspired and convinced. He spoke with such force that even those whose conscience was asleep would awake. Infrequently he would bang his staff, looking around as if to seek those who might be sleeping. At those times he seemed a stern accuser and it was fairly terrifying to stand before him.

Bishop Jonah often came to visit us in Harbin. Usually he came right after the Liturgy, about ten o’clock. Archbishop Meletius would be having his tea; suddenly the doors would open and in would come Bishop Jonah with his childlike laugh. Archbishop Meletius would also smile and then start picking on him. ‘What are you doing, acting like a fool-for-Christ? Honestly, why can you not have a more decent cassock; it is hanging in shreds, you ragamuffin!’ Bishop Jonah would laugh: ‘This is good enough for me; I have a lot of children who need to be fed and dressed.’ The archbishop would invite him to the table for tea. After tea Bishop Jonah would drive into the city to visit some acquaintances-benefactors.

"The evening would again find both hierarchs deep in discussion. There were memories of the Kazan Academy, the professors, fellow students. Often Bishop Jonah would speak of his benefactress, the "Tea Queen Litvinova." She helped greatly; I do not think he would begin a new venture without consulting her. Those evening discussions lasted sometimes until midnight; I was ready to listen to those two angelic inhabitants of the earth until morning. Afterwards they went to rest. Bishop Jonah usually read the evening prayers. Occasionally they also read an akathist. The next day fund raising was again on the agenda. The Bishop never liked to stay too long, saying, ‘I have the children, the church, the high school, the orphanage; I must go home.’

"In the matter of education, the Bishop often phoned the Soviet Consul, asking its help in supplying his orphanage and high school with the necessary paper, pens, pencils, chalk and slate boards. The consul was obstinate, but the Bishop would press his case: ‘For whom am I asking?! These are your children; poverty is your child! I repeat: I need... (such and such). I ask that you send these things to me by eight o’clock tomorrow.’ And he would hang up... The consul used to tell people close to him: ‘If among us we had only five people like him, we could turn the whole world around.’ Such was Bishop Jonah’s impact."

In the words of I. Borosov, Bishop Jonah was "the ideal pastor:"

Raised without parental affection, Bishop Jonah was especially attentive to the needs of children battered by poverty and dislocation. One of his helpers at the orphanage, K. A. Terekhovskaya, describes his personal involvement in what was his favorite project, his "special child:"

Death’s arrival was unexpected. Bishop Jonah had been caring for a priest who died of typhoid fever. He himself contracted chronic tonsillitis just days before the scheduled fall collection for the orphanage. Suggestions to postpone it were of no use. Feverish, barely able to stand, Vladyka blessed the carts from the window of his study and remained there as the carts returned, calling each driver for a report on the result of his expedition.

Due to complications, Bishop Jonah developed blood poisoning. His doctor suggested he avail himself of the archbishop’s presence to have confession and partake of the Holy Mysteries. Bishop Jonah understood that his hours were numbered. After having communed himself, he went into his study and typed out his final testament:

Meanwhile, a moleben for the health of the Bishop was being served in the church. There one could hear the insistent cries of the children: "Dear God, please, do not take away our Vladyka!"

Returning to his room, Bishop Jonah individually blessed those tearfully crowded in his quarters. He then put on the epitrachilion and cuffs which had belonged to Elder Ambrose of Optina and began loudly and with prostrations, to read the canon for the departure of the soul. He asked to be buried in his white, embroidered vestments, simply, without pomp. Then, overcome with weakness, he lay down on his bed: "God’s will be done. Now I shall die." Within minutes his soul was transported to that other world, which knows neither sickness, nor sorrow, nor sighing, but life everlasting in the joy of the Lord

Manjuria’s entire populace — Orthodox and non-Orthodox alike — mourned the Bishop’s death. It brought an immense moral loneliness, an emptiness which even grief failed to satisfy. The mass of burning candles at his gravesite reflected but dimly the light he had brought to the hearts of men. In this light his memory is preserved for all eternity.

by O.S. in Russkaya Zhizn