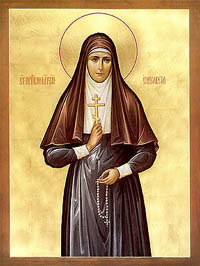 ne of the brightest stars in the celestial array of Russia's New Martyrs is holy Grand Duchess Elizabeth. A convert to Orthodoxy, she outshone many of those whose Faith she had so ardently embraced. She was like a sun whose penetrating rays warm hearts grown cold and renew the lost faith of a fallen and despairing humanity, as if to say that not all have succumbed to an egotistical self love, that there are still those servants of Love, whose example points the way to the true path, tom happiness both on this earth and for aIl eternity. She placed a law in her heart: that the strong bear the frailties of the weak. Love was the cornerstone of her life and all her activities. This love made easy for her what was difficult, it made serving her fellowman a plea sure, and through it the forgiveness of enemies was made possible. For the sake of this Love she sacrificed herself for others, thereby fulfilling that greatest of commandments according to the Apostle of love, that "we ought to lay down our lives for the brethren" (I John3:16).

There exists perhaps no more eloquent tribute to the holy Grand Duchess than the spiritual portrait so finely drawn by the late Metropolitan Anastassy:

"She was a rare combination of exalted Christian spirit, moral nobility, enlightened mind, gentle heart, and refined taste. She possessed an extremely delicate and multifaceted spiritual composition and her outward appearance reflected the beauty and greatness of her spirit. Upon her brow lay the seal of an inborn, elevated dignity which set her apart from those around her. Under the cover of modesty, she often strove - though in vain, to conceal herself from the gaze of others, but one could not mistake her for another. Wherever she appeared, one would always ask: "Who is she who looketh forth as the morning, clear as the sun" (Song of Solomon 6:10)? Wherever she would go she emanated the pure fragrance of the lily. Perhaps it was for this reason that she loved the color white - it was the reflection of her heart. All of her spiritual qualities were strictly balanced, one against another, never giving an impression of one-sidedness. Femininity was joined in her to a courageous character; her goodness never led to weakness and blind, unconditional trust of people. Even in her finest heartfelt inspirations she exhibited that gift of discernment which has always been so highly esteemed by Christian ascetics..."

The Grand Duchess was born on October 20, 186l, the daughter of Princess Alice of Hesse and the granddaughter of Queen Victoria of England, under whose strict tutelage she received both an extensive and a practical education. Her mother died when she was still young, the first tragedy in a life marked by inner suffering. But through, greatness of spirit, her sorrow at the absence of maternal love was later transformed into a tender and solicitous compassion for others who lacked this love.

Chosen as the future wife of the Grand Duke Sergei Alexandrovich, the Grand Duchess arrived in Moscow and set about learning all she could about her newly adopted homeland, its people and its culture. Her heart was soon captured by the beauty and spiritual depth of Orthodoxy which she discovered so tightly interwoven into the rich fabric of the Russian soul. It was not mere formality that prompted her decision to become Orthodox, but a strong inner conviction. In Orthodoxy she found full expression for the natural spiritual cast of her character. Social obligations at the palace, however, prevented this disposition from blossoming, although in keeping with her new position she was able to dedicate much time to philanthropic activities. It was only with the tragic assassination of her husband in 1905 that Providence granted her the opportunity to withdraw from the tumult of a world which her soul found so wearisome. But through her patient endurance she had already achieved a measure of Christian perfection. This was manifest in her ready forgiveness of her husband's murderer whom she even went to visit in hopes of softening his heart. On the memorial cross erected upon the site of her husband's death, she had inscribed the Gospel words, "Father, forgive them for they know not what they do...' She had already begun the ascent up the ladder of Christian virtue. 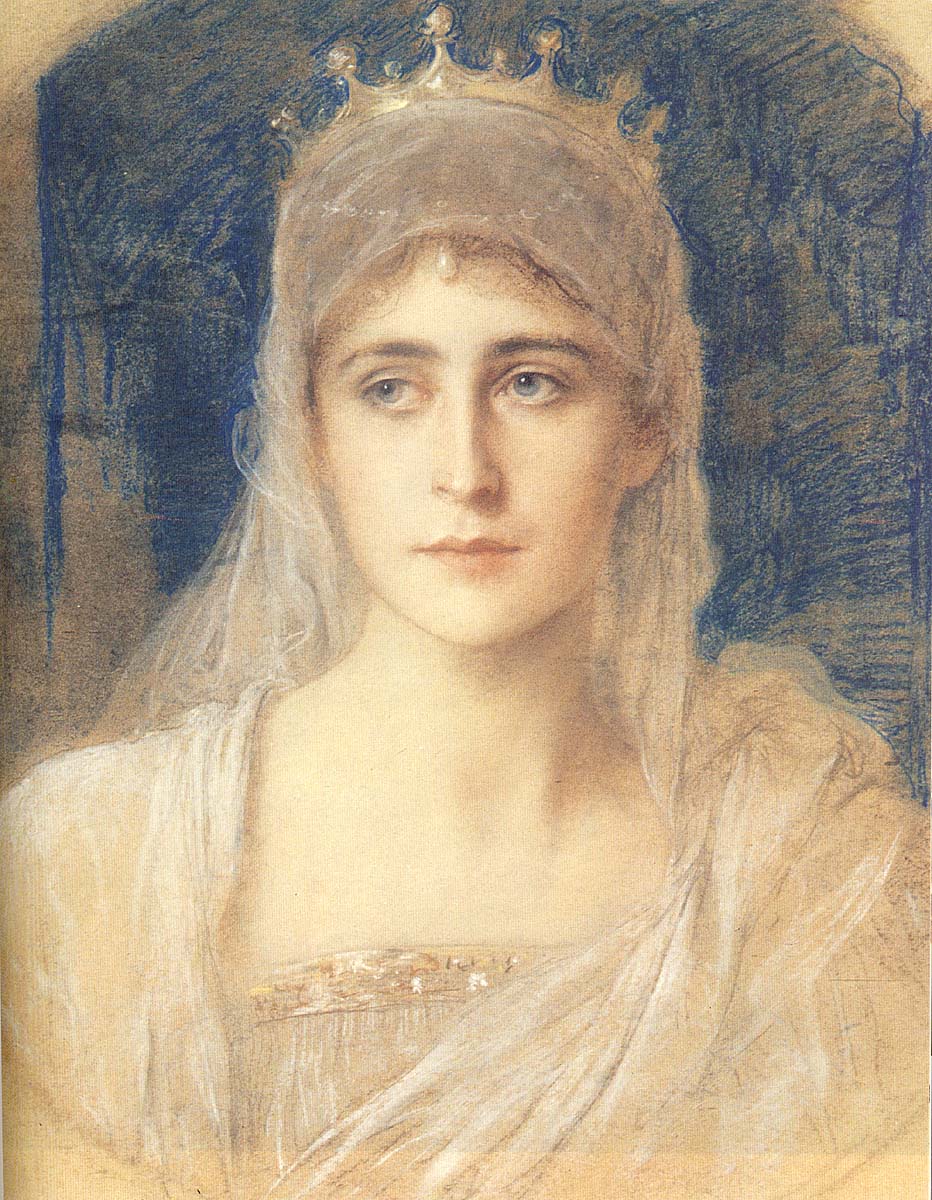 Ignoring the scandal caused by such a move, the Grand Duchess left the royal apartments and settled in a building which she had acquired at Ordinka. Here, with the counsel of the eiders of the Zosima Hermitage under whom she had placed herself in total obedience, she laid the foundation for a sisterhood which combined in itself the ascetic labors of the monastic life and works of charity. This quiet haven in the midst of a bustling city was named in honor of Mary and Martha, the sisters of Lazarus, whose two natures of service and prayer were so beautifully intertwined in the mission of the new community. "To be not of this world and at the same time to live and act in the world in order to transform it - this was the foundation upon which she desired to establish her convent."

The Grand Duchess was personally involved in all the plans for the buildings of the community, and they reflected her refined aesthetic sensibilities. The main church was built in the traditional Novgorod-Pskov style and painted by the well-known Russian artist Nesterov. The austere white walls were balanced with exquisite sculptured ornamentation. The architectural harmony of the buildings, the peaceful atmosphere, the beauty of the church services - all combined to lift the tired soul from its earthly cares and give it a glimpse of paradise. Even members of the unchurchly contemporary Russian society, whose spiritual re-education was of such concern to the Grand Duchess, were drawn to this unique community.

"It is not surprising that the convent quickly blossomed and attracted many sisters from the aristocracy as well as the common people. Nearly monastic order reigned within the inner life of the community and both within and without the convent the activities of the Grand Duchess consisted in the care of those who visited the sick who were lodged in the convent, in the material and moral help given to the poor, and in the almshouse for those orphans and abandoned children found in every large city. The Grand Duchess paid special attention to the unfortunate children who bore within themselves the curse of their fathers' sins, the children born in the turbid slums of Moscow only to wither before they had a chance to blossom. Many of them were taken into the orphanage built for them where they were quickly revived spiritually and physically. For others, constant supervision at their place of residence was established. The spirit of initiative and moral sensitivity which accompanied the Grand Duchess in all her activities, inspired and impelled her to search out new paths and forms of philanthropic activity, which sometimes reflected the influence of her first, western homeland, and its advanced organizations for social improvement and mutual aid..."

Wherever there was a need the Grand Duchess would try to answer it, and only her strong spirit was able to keep her from being entirely overcome physically by all that she in her willingness was ready to undertake. All her activities, however, did not cause her to wander from the "one thing needful," and while serving the least of Christ' s brethren, she was ever at Christ's feet, listening to His words.

The sorrowful tribulations which visited Russia as the Revolution spread its shadow over the land only caused her virtues of love and self-sacrifice to shine more brightly. Together with her younger sister, Tsaritsa Alexandra, she was slandered on account of her German blood. But she harbored neither bitterness nor hatred towards her enemies, and even the revolutionaries recognized her greatness of spirit and spared her and her community for a time,

Finally, however, the martyr's crown was brought within her reach. On Pascha, 1918, the Grand Duchess was suddenly arrested and taken first to Ekaterinburg and then to Alopaevsk where, with her ever-faithful companion Sister Barbara, she was imprisoned in one of the city schools. On the fateful night of July 5/18, together with other royal captives, she was taken in an automobile outside the city and buried alive in a mine shaft. Even here, in the bowels of the earth, she did not cease to manifest her sacrificing love. Excavations have shown that until the last moment she strove to serve the grand dukes who were severely injured by the fall.

At last her precious remains - which, according to eye-witnesses were found in the mine shaft completely untouched by corruption - were received with triumph in Jerusalem and laid to rest in a sepulchre of the church of St. Mary Magdalen, just over the hill from Bethany where the sisters, Sts. Martha and Mary, served and glorified the Lord.